A look at the Secretary role through data

Being a secretary for a Toastmasters club is a meticulous job. There’s quite a bit of quantitative data that I can look at to figure out how well I’m providing my club with timely minutes. In this post, I’ll show data gathered from Google Docs and Email that shows some of the efforts I’ve spent creating meeting minutes. So far, I’ve written over a dozen minutes, with several more dozen to go.

I create the minutes from a perpetual stew of a document that I continue to make copies of. The revision history in Google Docs can give a good idea of the time I spent on the minutes. I chose a recent document highlighting my typical workflow, divided into distinct phases of note-taking and revising. 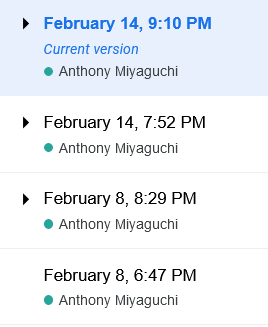 I spent Monday (February 8) writing the majority of the minutes during the meeting note-taking. This involves capturing the attendees, who spoke, and roles that were taken. I write quite a bit here. At a later time on Sunday (February 14), I spent about an hour and 20 minutes editing the document before sending it out to the group at 9:12 PM via the mailing list. It’s handy having all of these timestamps in digital documents to keep track of time.

I would say that this is a typical week for me, which ends up being ~3 hours of work. It’d be nice to measure the variance in this data through the other 13 documents, but data entry is not the most fun way to spend an evening (the plots take that spot!). This is more than I’d like to spend on the minutes, which I think could be cut by another hour or so as I develop the muscle and make optimizations to the process.

Number of words/characters in the minutes

A Google Doc has the benefit of keeping everything in version control that can be referenced later. I compared revisions of the same document to see the effect on the document length. At the end of the meeting, the number of words was 1377, and the number of characters was 8119. After I got through revising the document, it was whittled down to 1120 words and 6819 characters.

Being wordy is easy; being concise is hard. The majority of my revision is removing content and making the summaries short but to the point. I think this document represents my work as Secretary so far. The revision efforts are to boil down my notes into something that can be referenced in the future — a time-consuming process for sure.

Delay in the publishing of minutes

The last source of data is the email timestamps from meeting minutes on the mailing list. In the 14 documents that I’ve written, the median time to delivery is five days. I consider my commitments to consistent timeliness a success as long as this doesn’t go beyond a week. There’s certainly room for improvement, though.

The data provides insight into the note-taking process, but it doesn’t entirely encapsulate the quality of my role as a Secretary. I want to continue to reduce the effort it takes to continue producing the same quality of work. Data plays a part in tracking progress, but it’s not a meaningful goal in itself.

In my next post, I’d like to write more about some of the goals that I’d like to achieve in the next few months as I continue in the rhythm of writing and rewriting.